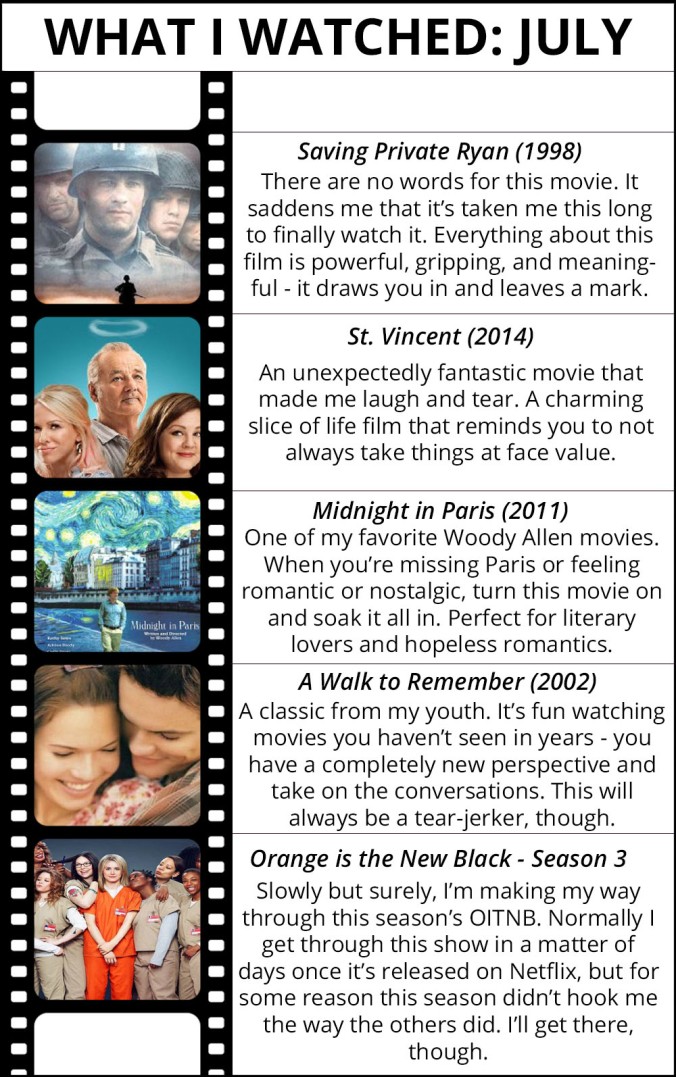 There were more homemade meals this month than actual movie-watching, though I did manage to start off the month with a couple of new ones. If you haven’t already seen Saving Private Ryan, you absolutely must. During the second half of the month I gravitated toward movies I love but haven’t seen in a while. It’s fun to revisit a movie you haven’t watched in years – it either makes you remember why you loved it so much, or you question why you liked it at all and analyze how your movie preferences have changed.

What movies did you watch this July?

There are always so many great things happening in New York City that it can be a challenge to filter through them all to find the gems. One thing I like to keep an eye out for are unique exhibitions happening around the city and surrounding areas. Here are the seven exhibitions I’m looking forward to – most of them end in the next couple of months, so be sure to check them out soon!

1. China: Through the Looking Glass

This incredible exhibit is set to break the popular Alexander McQueen exhibit that took place at The Met in 2011. Because of its popularity, the exhibit has been extended through Labor Day weekend. This exhibition houses some of the most beautiful haute couture and avant-garde ready-to-wear pieces of clothing alongside Chinese art and screens featuring Chinese movies. I visited once, but I’m very tempted to go again. Until September 7, 2015.

Get a behind-the-scenes look at the pop cultural phenomenon that transformed television. Check out and interact with props, costumes, and sets that you’ve seen on your T.V. every Saturday night for the past 40 years. Maybe you’ll see a prop from one of your favorite sketches!

This incredible exhibit gives you an up-close-and-personal look at Frank Sinatra’s life, from his time on the silver screen to when his voice captured the hearts of America. You can see his clothes, recording studio, Oscar trophy, and read all about his life and how he came to be an icon. Until September 4, 2015.

4. Revolution of the Eye: Modern Art and the Birth of American Television

This is the first exhibition to explore how avant-garde art influenced and shaped the look and content of network television from the late 1940s to the mid-1970s. Having majored in media studies, this exhibit looks intriguing. Until September 27, 2015. 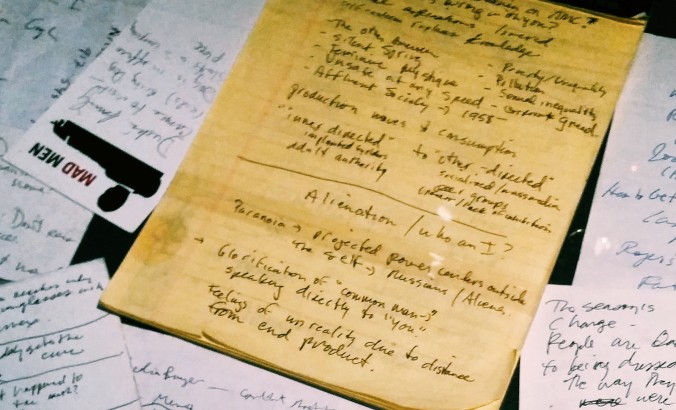 I saw this exhibit a couple of months ago, but since it’s still running for another two months, I’d recommend all Mad Men fans go see it. You get to see the costumes and scripts, but the coolest part of the exhibit for me was stepping into Betty and Don’s kitchen and looking around Don’s office. It all comes to life – a true step back into the 1960s. Until September 6, 2015. 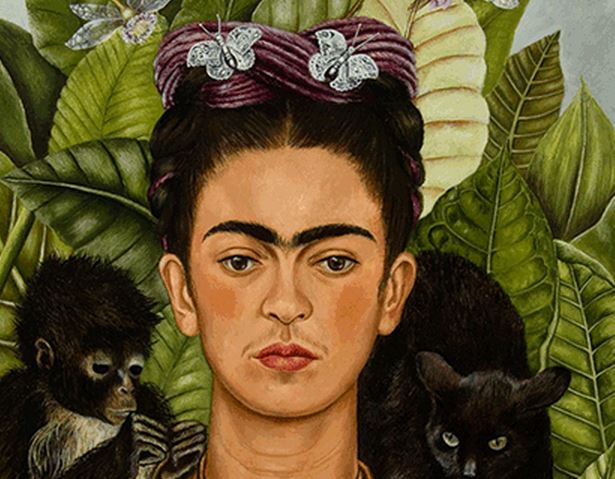 I can’t wait to see this gorgeous looking exhibit of Frida Kahlo – it’s the first exhibition to examine the artist’s appreciation for the beauty of the natural world. Until November 1, 2015. 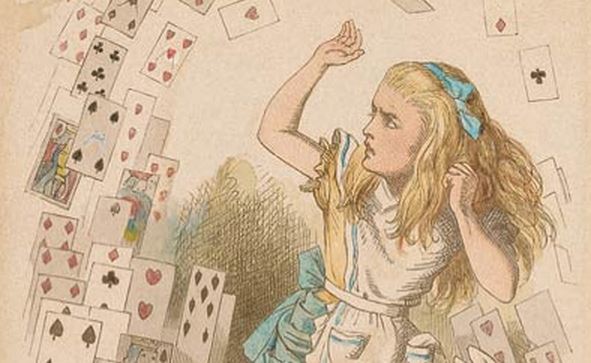 Love Lewis Carroll’s classic tale? For the first time in 30 years, the original manuscript of Alice in Wonderland will be on display along with original drawings and letters, photographs, and objects. Until October 11, 2015.

Which exhibits are you looking forward to seeing?

Summer is officially here, and with it comes a multitude of cinematic features that offer a good excuse to escape the heat. A few of the blockbusters have already come out (Jurassic World and Avengers: Age of Ultron), and I’m looking forward to more low-key films. I can’t get enough of Amy Schumer, so Trainwreck will be a blast to watch. One I’m particularly looking forward to is Crouching Tiger, Hidden Dragon II: The Green Legend.

Jimmy’s Hall – July 3, 2015 | This British-Irish drama tells the story of Jimmy Gralton who led the Revolutionary Workers’ Group. Gralton built a dance hall on a rural crossroads in Ireland to encourage people to learn, dream, argue, and to have fun.

Trainwreck – July 17, 2015 | Amy Schumer not only wrote the screenplay, but she also stars in this movie. That’s all I need to know to go see it.

Mr. Holmes – July 17, 2015 | Sherlock Holmes is retired, looks back on his life, and deals with an unsolved case. Hopefully this movie will hold me over until Sherlock Season 4 returns.

Crouching Tiger, Hidden Dragon II: The Green Legend – August 28, 2015 | This is the sequel to the 2000 film, and it is the first feature film to premiere in theaters and on Netflix at the same time. So cool, though I’d want to see all the action on a big screen.

What movies are you excited to watch this summer?

Last month I visited The Metropolitan Museum of Art to see the China: Through the Looking Glass exhibit. It was stunning, to say the least. This exhibition houses some of the most beautiful haute couture and avant-garde ready-to-wear pieces of clothing alongside Chinese art and screens featuring Chinese movies.

The entire exhibit tells a story, and the art, music, film screenings, and fashion draws you in completely. Not only was I completely absorbed with the fashion designs, but I was also captivated by the movies that were chosen to be screened alongside the clothing. These are the movies I took note of while walking through the exhibit, and I plan on watching every single one.

This month’s movies involved more throwback films to the early 90’s, which is always interesting to see style-wise (on-screen and in the way the movies are made). I gravitated more toward Netflix to find movies to watch (versus iTunes or HBO). I really like the new Netflix format – I’ve found so many more great movies to add to My List. What movies did you watch this month?

The time has come for high school and college graduations all around the country. My sister recently graduated from university, so this post is in honor of all that she has accomplished. Whether you are graduating, or your sibling, friend, or family member is earning that hard-earned degree, congratulations! Celebrate with dinner and a movie – these are eight of my favorite graduation films.

Back to School – A rich businessman enrolls in college to help his discouraged son get through school. This movie is both ridiculous and funny.

Legally Blonde – Who can forget the words Elle Woods squeals at the end of her graduation speech: “Congratulations class of 2004, we did it!”

The Graduate – Appropriately named, a disillusioned college graduate finds himself torn between his older lover and her daughter. You can’t go wrong with a Mike Nichols movie.

Say Anything – How can you not love this movie? An underachiever and the class valedictorian fall in love the summer before she goes to college.

She’s All That – Serious drama occurs when a high school jock makes a bet that he can turn an unpopular girl into the school’s prom queen. The graduation scene at the end is pretty sweet – he has a lot to make up for!

Grease – A classic love story about two high schoolers (who clearly look like they’ve already graduated from college), this is such a fun movie to watch. The carnival at the end of the movie is a way to celebrate all they’ve been through.

Dead Poets Society – If there’s a great message to send in a movie, it’s in this one: Carpe Diem, Seize the Day. Recent graduates: this is your life, make the most of it!

Ferris Bueller’s Day Off – Though you don’t see Ferris Bueller actually graduate, him skipping a day of high schools demonstrates serious senioritis. The struggle is real.

Mother’s Day is quickly approaching, and what better way to celebrate than to spend the afternoon with champagne in hand, a mother-daughter movie on the screen, and your mom by your side. These movies are a variety of heartbreaking, hilarious, and thought-provoking. No two relationships between mother and daughter are alike (in movies and in life!), and it’s interesting to see how the ones in these films develop. 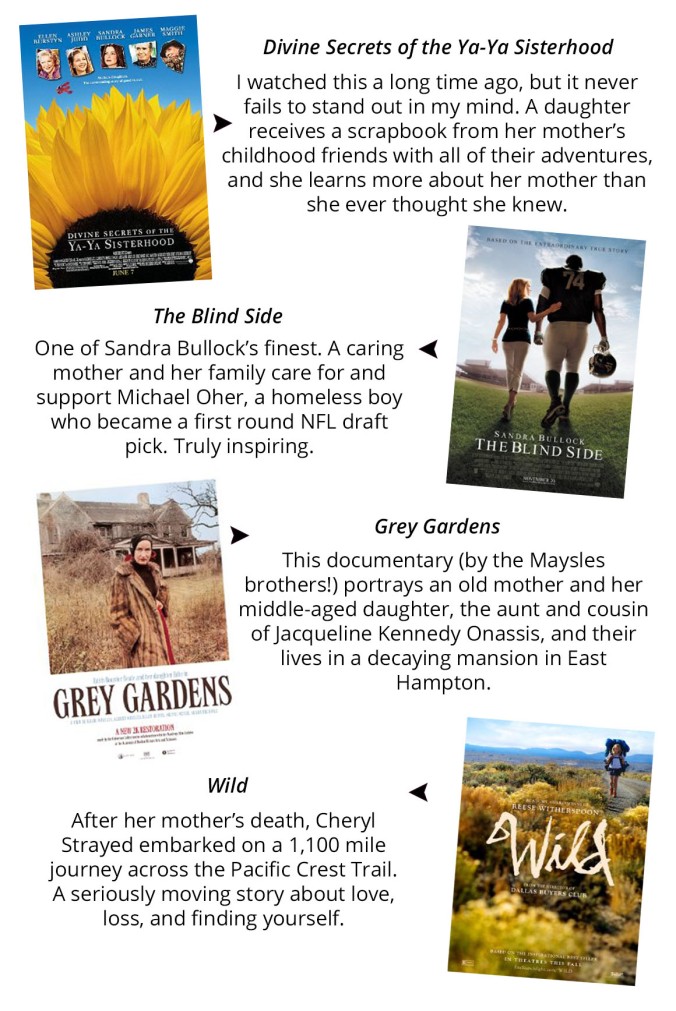 What are you watching on Mother’s Day?

A Dash of Cinema
Create a free website or blog at WordPress.com.